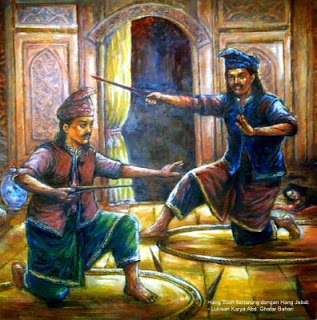 Putrajaya, 19 January. The controversy over the existence of Hang Tuah and his friends can be finally put to rest with MNN’s recent research findings that positively confirm that the five were not a myth.

MNN’s history researchers, Dr Kultip Singh (who resides in Bukit Bruang) and Dr Robiah Yassin, after 8 hours of meticulous research based on documents from the archives in Portugal, China, India, Egypt and Bangladesh, have discovered that Hang Tuah and his friends did actually live in 15th century Malacca. Most importantly the MNN research also has revealed that Hang Tuah had 8 friends, not 4 as previously assumed and their lives were much more interesting than what has been described in history books.

According to Dr Kultip Singh “we are disappointed with Professor Khoo’s statement that Hang Tuah was a myth. Khoo should have done his homework better. The archives in Bangladesh alone have volumes of documents on him while the three papyrus scrolls that were discovered in the Egyptian Temple of Karnak had described him and his roles pretty accurately. We have rummaged through the ancient letters from the 15th century Hang dynasty in China and the 15th – 16th century Koli Pi dynasty in India – all of them described Hang Tuah and his 8 friends extensively”.

Dr Robiah Yassin, who was formerly the curator at the National Museum, explained further. “Our findings, while confirming the existence of Hang Tuah and his friends, also demonstrate that most of the past historical accounts were wrong. All our history books are grossly wrong. We need to rewrite our books so that the rakyat will know the true history of Hang Tuah and his 8 friends”.

Monyet News Network has learnt that the recent findings include :

1.Besides Tuah, Jebat, Kasturi, Lekir and Lekiu, the other four were Hang Gerampi, Hang Senesi, Hang Silipi and Hang Hapi. It is not clear why the latter four do not appear in most historical accounts. The 9 were friends, not brothers as some historians have claimed.

2.All of them were employed by Sultan Mansur Shah to take care of security. The Portugese records show that all 9 were Nepali Gurkhas. DNA analysis confirms that the nine are also the ancestors of all the Nepali guards in Malaysia. [There is archaeological evidence of a large building on the left bank of Malacca river, believed to be the then Nepali embassy].

3.All nine were proficient in martial arts and were said to be well-trained in the ways of the Force. Hang Tuah and Hang Gerampi are said to have the highest midiclorian counts.

5.There is a reference to Hang Gerampi having an illicit affair with Dayang Rosmah Kemboja, one of Mahmud’s concubines.

6.Sultan Mahmud put Hang Senesi and Hang Silipi in-charge of the palace administration and finance – and Chinese records say that the duo were excellent administrators. Hang Senesi is credited to having introduced the famous kopio money tax system

7.During the so-called Portugese invasion in 1511 (now proven that it was actually a Bangladeshi coup), Hang Gerampi and Hang Hapi were killed trying to defend the Sultan’s harem. There is a monument near Bukit Beruang (in modern day Melaka) dedicated to them.

8.Hang Senesi and Hang Silipi visited the Imperial Palace of the Ming Emperor in 1470 and spent 2 years studying Chinese medicine, astronomy and cuisine. Upon returning to Malacca in 1472, they, without the knowledge of the Sultan, set up the first Chinese seafood restaurant on the banks of Malacca river.

9.There are records of Hang Hapi visiting the Koli Pi dynasty in southern India between 1460 and 1463. The artifacts unearthed near Tanjavoor in present day Tamil Nadu tell the story of a young warrior from Malacca named Haa Pee visiting the palace of the King Vellusamy II in 1460. Although records are scanty, it is believed that Hang Hapi was sent by Sultan Mahmud to Tanjavoor to purchase curry powder.

MNN’s history research department hopes that with these findings, the controversy over Hang Tuah will be laid to rest. We have a lot of work to do to incorporate the new findings into our history books.

MNN’s history research team has forwarded their findings to the Prime Minister’s office. These findings are expected to be tabled at the next Cabinet meeting. MNN expects sparks to fly.

Want to join the discussion?
Feel free to contribute!